Our unique cleaning solutions is 100% natural, with active ingredients derrived from young oranges. Our eco friendly solution is 100% biodegradable and contains no Alcohol or Chlorine. The result is a tough cleanser, which is safe for Human Consumption and also the environment.

Our solution is Approved by the Irish Government and is currently availible in over 13 Countries across 4 continents.

Chamco Anti Bacterial Wipes are unique containing no alcohol or chlorine, harnessing the natural power of young oranges, these wipes are versatile, while killing 99.99% of bacteria and their spores dead.

Our unique pen design is perfect for anyone from health conscious to health professionals. many Alcohol based cleaners can cause irritation to skin if used on a daily basis. Chamco’s unique 100% alcohol free solution is powerful and non toxic.

Our unique cleaning solution is versatile and is being successfully used in a variety of production and food preparation facilities. We are committed to working with existing systems and allowing for a cost effective solution for you business.

Chamco’s unique anti bacterial cleaner kills 99.9% of bacteria including their spores dead, leaving no residue or harmful chemicals, below are listed some of the most harmful forms of bacteria; 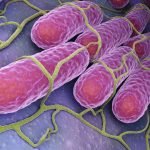 Salmonella is a genus of rod-shaped, Gram-negative, non-spore forming, predominantly motile enterobacteria with diameters around 0.7 to 1.5 µm, lengths from 2 to 5 µm, and flagella which project in all directions (i.e. peritrichous).

They are chemoorganotrophs, obtaining their energy from oxidation and reduction reactions using organic sources, and are facultative anaerobes.

Most species produce hydrogen sulfide, which can readily be detected by growing them on media containing ferrous sulfate, such as TSI. Most isolates exist in two phases: a motile phase I and a nonmotile phase II.

Cultures that are nonmotile upon primary culture may be switched to the motile phase using a Cragie tube. Salmonella are closely related to the Escherichia genus and are found worldwide in cold- and warm-blooded animals (including humans), and in the environment.

They cause illnesses such as typhoid fever, paratyphoid fever, and the foodborne illness salmonellosis. Salmonella is properly pronounced /ˌsælməˈnɛlə/ voicing the initial letter “L,” since it is named for pathologist D.E. Salmon, and has nothing to do with the salmon fish. 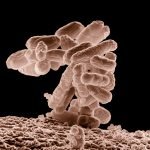 Escherichia coli (commonly abbreviated E. coli; pronounced /ˌɛʃɨˈrɪkiə ˈkoʊlaɪ/, named after Theodor Escherich) is a Gram negative rod-shaped bacterium that is commonly found in the lower intestine of warm-blooded organisms (endotherms). Most E. coli strains are harmless, but some, such as serotype O157:H7, can cause serious food poisoning in humans, and are occasionally responsible for product recalls.

The harmless strains are part of the normal flora of the gut, and can benefit their hosts by producing vitamin K2, and by preventing the establishment of pathogenic bacteria within the intestine. E. coli are not always confined to the intestine, and their ability to survive for brief periods outside the body makes them an ideal indicator organism to test environmental samples for fecal contamination.

The bacteria can also be grown easily and its genetics are comparatively simple and easily manipulated or duplicated through a process of metagenics, making it one of the best-studied prokaryotic model organisms, and an important species in biotechnology and microbiology. E. coli was discovered by German pediatrician and bacteriologist Theodor Escherich in 1885, and is now classified as part of the Enterobacteriaceae family of gamma-proteobacteria. 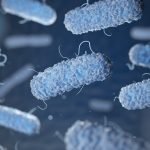 Clostridium difficile (Greek kloster (κλωστήρ), spindle, and Latin difficile, difficult), also known as “CDF/cdf”, or “C. diff”, is a species of Gram-positive bacteria of the genus Clostridium that causes diarrhea and other intestinal disease when competing bacteria are wiped out by antibiotics. Clostridia are anaerobic, spore-forming rods (bacilli). C. difficile is the most serious cause of antibiotic-associated diarrhea (AAD) and can lead to pseudomembranous colitis, a severe infection of the colon, often resulting from eradication of the normal gut flora by antibiotics.

The C. difficile bacteria, which naturally reside in the body, become overpopulated: The overpopulation is harmful because the bacterium releases toxins that can cause bloating, constipation, and diarrhea with abdominal pain, which may become severe. Latent symptoms often mimic some flu-like symptoms. Often, it can be cured simply by discontinuing the antibiotics responsible. In more serious cases, oral administration of metronidazole or vancomycin is the treatment of choice. Relapses of C. difficile AAD have been reported in up to 20% of cases. 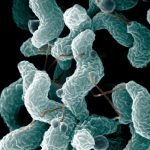 The genus Campylobacter, (meaning ‘twisted bacteria’) first discovered in 1963, describes Gram-negative, spiral, microaerophilic bacteria. Motile, with either uni- or bi-polar flagella, the organisms have a characteristic spiral/corkscrew appearance and are oxidase-positive.Campylobacter jejuni is now recognized as one of the main causes of bacterial foodborne disease in many developed countries.

At least a dozen species of Campylobacter have been implicated in human disease, with C. jejuni and C. coli the most common. C. fetus is a cause of spontaneous abortions in cattle and sheep, as well as an opportunistic pathogen in humans. 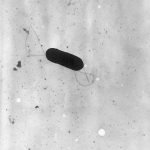 Listeria is a bacterial genus containing seven species. Ostensibly named after the English pioneer of sterile surgery, Joseph Lister, the genus was given its current name in 1940.

Listeria species are Gram-positive bacilli and are typified by L. monocytogenes, the causative agent of listeriosis. Listeria ivanovii is a pathogen of ruminants, and can infect mice in the laboratory, although it is only rarely the cause of human disease. 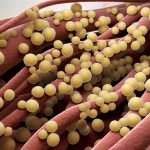 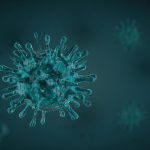 Influenza A (H1N1) virus is a subtype of influenza A virus and was the most common cause of human influenza (flu) in 2009.

Some strains of H1N1 are endemic in humans and cause a small fraction of all influenza-like illness and a small fraction of all seasonal influenza. H1N1 strains caused a few percent of all human flu infections in 2004–2005. Other strains of H1N1 are endemic in pigs (swine influenza) and in birds (avian influenza). In June 2009, the World Health Organization declared the new strain of swine-origin H1N1 as a pandemic.

This strain is often called swine flu by the public media. This novel virus spread worldwide and had caused about 17,000 deaths by the start of 2010.